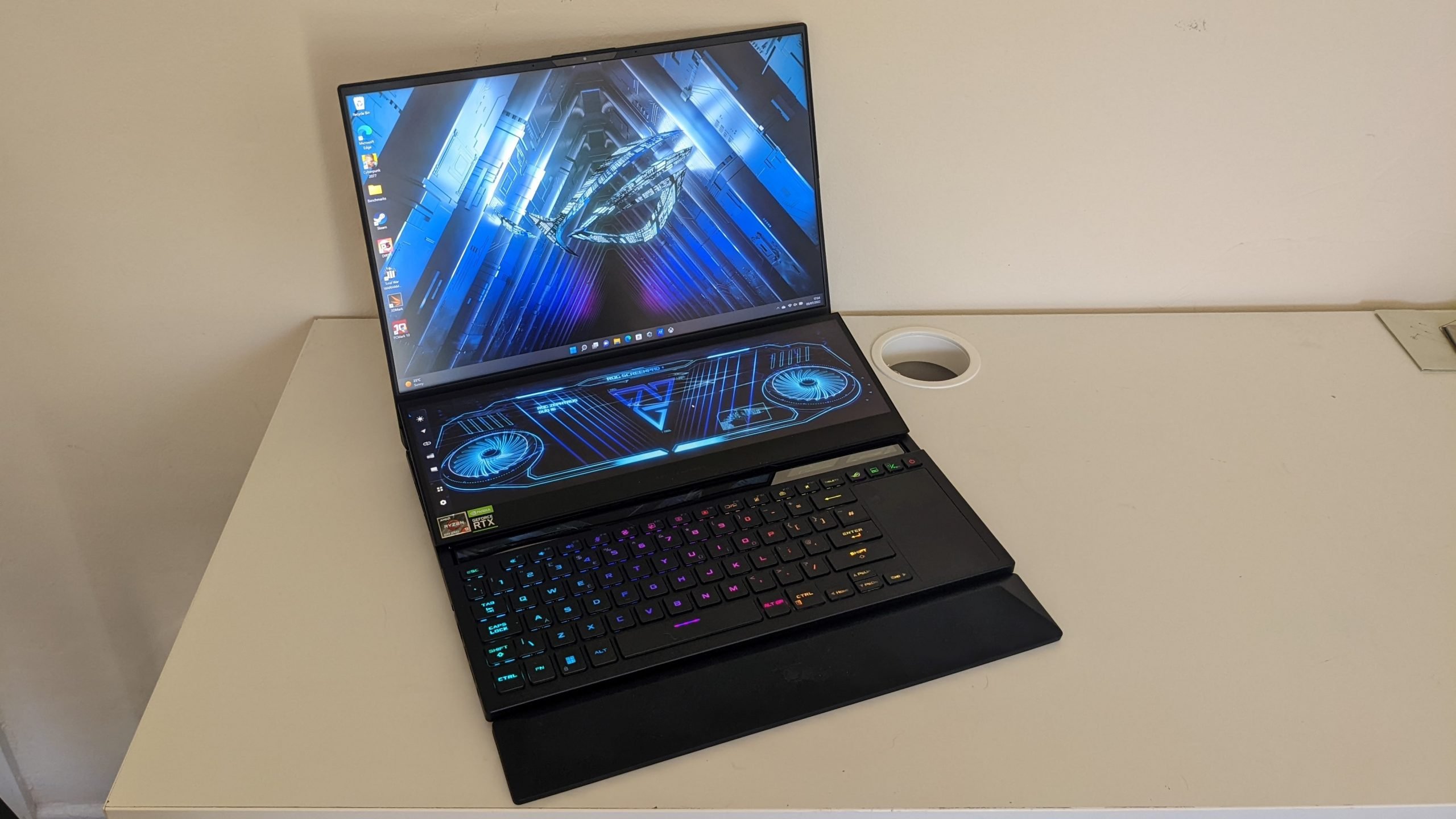 I had the pleasure of checking out the original Asus ROG Zephyrus Duo back when it originally launched (in a smaller 15-inch configuration) in 2020. At the time, Asus proudly declared it the world’s first dual-screen gaming laptop – a slightly loaded statement, since the manufacturer’s own Zenbook Pro Duo was already offering solid gaming performance in a twin-screen laptop.

Still, for all the novelty the original Zephyrus Duo offered, it didn’t really impress me. The keyboard and trackpad were cramped together beneath the secondary screen, which felt poorly implemented at best. Gaming performance was great, sure, but poor speakers, an underdeveloped design, and noisy-ass fans all contributed to a less-than-stellar overall experience – a far cry from the best laptops.

Fast-forward two years, though, and the Zephyrus Duo is back with a vengeance. Well, perhaps not vengeance exactly, but a bigger screen, better audio, and new internal components all mean that the Asus ROG Zephyrus Duo 16 is a big brother to the original laptop that means business.

Much like its predecessor, the Asus ROG Zephyrus Duo 16 places its secondary display above the keyboard on the laptop’s bottom half, mounted on a mechanical hinge that tilts the screen upwards towards the user when you open the lid. The second screen, dubbed ‘ScreenPad Plus’ is a 14-inch IPS touch panel with smart stylus support, with a 4K resolution – slightly odd considering that models are available with the full gamut of primary display resolutions, but it looks amazing.

In everyday use, the ScreenPad Plus can be used simply as an extension of the main screen (your mouse cursor slips smoothly from one display to the other), or run a variety of pre-loaded functions – like system hardware monitoring, so you can keep an eye on your CPU temps while playing a game. We do feel like it could still have more baked-in functions, though – a bundled stylus could have been a worthy inclusion here.

Gaming performance with the Ryzen 6900HX processor and your GeForce RTX 3000-series GPU of choice is obviously stellar (though we’ll get to the details of that further down), and improved thermal design means that this laptop runs cooler and quieter than not just its progenitor, but many of the best gaming laptops too.

The big downside here is an unsurprising one; the Asus ROG Zephyrus Duo 16 is seriously expensive. Even the cheapest model (which uses an RTX 3060 GPU) will run you $2,499, while other models reach as high as $3,999. It’s not the most ludicrous pricing we’ve seen on a gaming laptop, but it’s certainly enough to make the average consumer pause for thought.

Here is the Asus ROG Zephyrus Duo 16 configuration sent to TechRadar for review:

There is a range of available models of the Asus ROG Zephyrus Duo 16, with the key difference between versions being the GPU and the main screen. The base model, which uses an RTX 3060, an FHD screen, 16GB of RAM, and a 1TB SSD, costs $2,499 – a fairly steep entry price, though undoubtedly a great configuration for 1080p gaming. The most affordable model currently available in the UK costs £2,699.99 and uses an RTX 3070 Ti with a Ryzen 7 6800H CPU.

Our version is a higher-end iteration, which packs a 16:10 QHD+ display with Asus’s ROG Nebula HDR technology, RTX 3080 Ti graphics card, 2TB of storage, and 64GB of RAM. This model costs a hefty $3,999 making it one of the more expensive gaming laptops on the market (though still not as costly as flagship offerings from the likes of Razer). Pricing is a little unclear on SKUs for Australia and other territories at this point, but expect to pay a minimum of AU$3,499.

Overall, it’s a bitter pill to swallow for anyone hankering for a sensibly-priced gaming laptop – this simply isn’t that, the dual screens and spec sheet make that immediately obvious. Even the base spec is far more expensive than a traditional RTX 3060 gaming laptop, so unless you really want that second display, consider looking for a more conventional equivalent.

Obviously, the big draw here is the dual-screen layout, which we have to admit looks awesome. Both displays are bright and vibrant, with great color reproduction and top-notch responsiveness on the lower touch display. The main display hinge feels robust, and the mechanism that elevates the lower screen is solid as a rock.

In fact, the overall build quality here is excellent; the keyboard might be squashed down beneath the second display, but the keys themselves are a joy to use, comfortable for both typing and gaming with a decent degree of travel and snappy actuation. The larger form factor of the Asus ROG Zephyrus Pro 16 means that the keyboard has a little more room to breathe, and Asus has seen fit to include a rubber wrist rest this time around – an excellent addition, since there’s no room on the laptop itself to rest your hands.

The trackpad now integrates left and right click into the pad, unlike the original Zephyrus Duo, which had two physical buttons. Personally, I preferred having the buttons, but this trackpad gains back some real estate as a result, so this will come down to personal taste. Firmly clicking the top corner of the trackpad transforms it into a numpad, illuminating a numeric grid of red LEDs.

Squishing the keyboard and trackpad down to fit in half of the laptop’s lower chassis is a design choice that will cause problems for some users, even if the newly-added wrist rest alleviates this somewhat. However, I found that once I’d been using the Asus ROG Zephyrus Duo 16 for a little while, it felt less uncomfortable – it just took a bit of getting used to. The shrunken trackpad is something of a non-issue anyway, since this is a beefy gaming laptop that practically demands you plug in a mouse.

In terms of physical ports, we’ve got a good selection here. Along the left-hand edge, a USB-A and USB-C port are joined by a MicroSD card reader, 3.5mm audio jack, and AC charge port. The opposite edge has a second USB-C, while the read edge plays host to another USB-A port, HDMI video out, and an Ethernet port. There’s also a bog-standard 720p webcam, which functions fine but isn’t anything exciting.

Here's how the Asus ROG Zephyrus Duo 16 performed in our suite of benchmark tests:

Given that our review model packs an RTX 3080 Ti, we weren’t that shocked that the Asus ROG Zephyrus Duo 16 performed great in our suite of gaming benchmarks. Note that while we’ve used the 1440p QHD presets for our results, this display is actually 2560×1600 pixels due to the 16:10 aspect ratio, which has a small impact on overall performance.

Still, it shouldn’t require much tweaking to get this laptop playing the latest games at 60+ frames per second at the native QHD+ resolution, with all our Ultra-preset tests showing framerates above 50. Note that we perform these tests without using Nvidia’s upscaling DLSS tech, so higher framerates and better ray-tracing performance will be available to the higher-resolution display models. Dialing down to 1080p resolution saw framerates comfortably rise above 60 in all games regardless of graphical settings.

General performance in synthetic benchmarks was good too, with the Ryzen 9 6900HX storming through our CPU tests with its mighty 4.9GHz boost clock. If you’re considering using this laptop for both work and play, it can comfortably handle it.

Thermal performance has evidently been improved from older Zephyrus Duo models too, with Asus touting its new Thermal Grizzly Conductonaut liquid metal solution as a huge help to system temperatures. This certainly seems to ring true; while the laptop did get a bit warm while gaming, the whole chassis never got uncomfortably hot. The dual fans seated beneath the secondary display were noticeably quieter than the original Duo, too.

One thing that genuinely blew me away was the audio quality. I’ve forgotten how many times I’ve said ‘look, just use a headset’ when reviewing a gaming laptop, but the Asus ROG Zephyrus Duo 16 had me double-checking that one of the other laptops in my office hadn’t somehow synced up to play the same audio. Six speakers and two woofers with surround sound create a frankly incredible soundstage that shines in action-packed games – perhaps the best I’ve ever seen in a gaming laptop.

I wasn’t expecting much from the battery life on the Asus ROG Zephyrus Duo 16, but it actually put up a decent fight – lasting for more than six hours in our battery life test, a respectable figure for a powerhouse gaming laptop with an extra display siphoning power. It’s not going to beat any productivity-focused laptops, but it’s a reasonable result.

The ScreenPad Plus can be turned off if you’re going to be running on battery life, which our testing indicated could extend the battery life by roughly twenty percent. Nonetheless, you’re going to want to plug this laptop into a wall outlet for any lengthy gaming sessions, much like every other high-end gaming laptop.

We pride ourselves on our independence and our rigorous review-testing process, offering up long-term attention to the products we review and making sure our reviews are updated and maintained – regardless of when a device was released, if you can still buy it, it's on our radar.

Read more about how we test 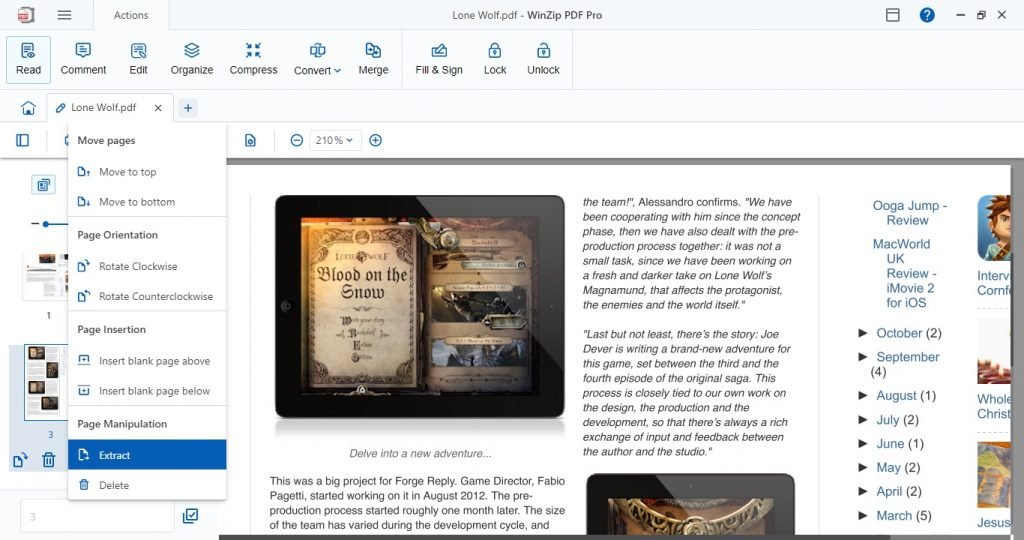 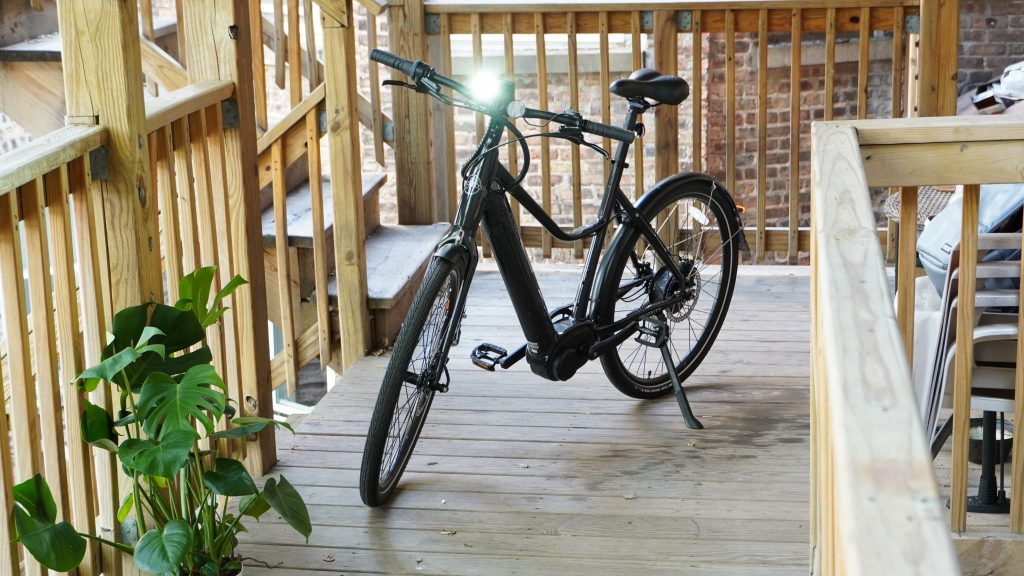 The Priority Current delivers a well-refined package with everything it needs provide a low-maintenance experience. 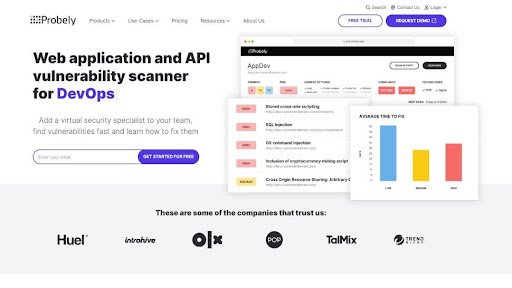